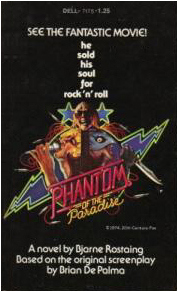 PHANTOM OF THE PARADISE

He sold his soul for rock n’ roll

He had no other name. His past was a mystery, his work already a legend. He wrote and produced his first Gold Record at fourteen.

He brought the blues to Britain. He brought folk and rock together. His band, the Juicy Fruits, single-handedly gave birth to the nostalgia wave of the Seventies.

He was looking for the Sound of the Spheres to inaugurate his own Xanadu — The Paradise, the ultimate rock palace.

This is the story of his search, the boy he found, the girl who sang the music, the monster who stole it.